The Church of St Islow in Partrishow 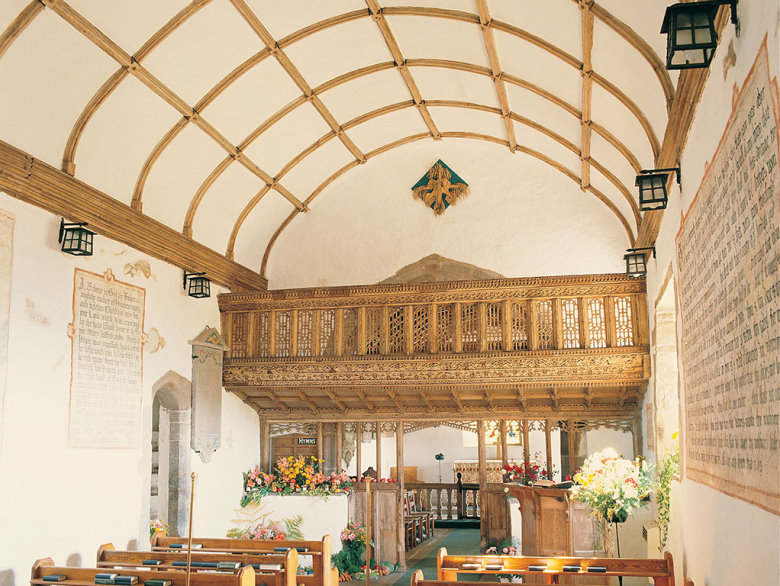 The Church of St Islow in Partrishow occupies a remote spot some five miles north of Abergavenny. Though it is small in size it contains a range of superb features that makes a visit well worthwhile.

When you enter the 14th century porch with it’s old holy water stoup you are immediately taken right back into the middle ages, the building is just a sheer delight, it’s whitewashed walls, pre-Reformation paintings, gorgeous decorated oak rood-screen and other antiquities are a pleasure to see. The closed-off room at the west side is a hermit’s cell and chapel that dates from the 11th-14th centuries and is called ‘Eglwys-y-Bedd’ or grave of St Ishow, indeed the saint is said to lie under the altar that has six consecration crosses, rather than the customary five. In 1908 human bones were discovered under the wall. Also at the west end a painted skeleton is a “figure of doom” holding a scythe, hourglass and spade. The painting has been whitewashed over many times but it always mysteriously re-appears again!

The Church appears to have seen considerable rebuilding over the centuries. Assuming the west lancet is original, the core of it and the Nave could be dated to the Norman period with the accompanying chancel dating from the 16th century. The Church also contains many features dating from both the 13th and 14th centuries. These include furnishings and fittings including a superb screen and rood loft dated around 1500.

A font within the Church bears an inscription dated 1055 and there are two earlier altar slabs and a large number of 18th century mural slabs. The churchyard, now extended, was originally very small, and retains a medieval churchyard cross. The porch is considered to be 15th century.

Documentary evidence supports the dating of the Church indicting it was established in the mid-11th century. Whether there was already a building on the site before that date remains undetermined. Orginally, it was apparently called Methur Issui, a corruption of Merthyr Ishaw, and together with the mother church of Llanbedr, was committed to the pastoral care of one Matgueith. An inscription on the font dates it to the time of Herwald, who was consecrated Bishop of Llandaff in 1056.

In 1864 Sir Stephen Glynne noted that the whole of the exterior was whitewashed. A small window at the west end of the nave was mutilated and closed, the chancel had an ugly modern ceiling encroaching on the arch. He thought the western chapel was co-eval with the church. A plain pointed doorway entered it on the south. The screen was described, together with the two altars beneath it, and the western chapel had a solid east wall had a third original stone altar against it. In the wall north of this he described a pointed trefoiled niche and two stone steps. On the south was a single-light window, and on the west an obtuse-headed small window, closed. There was a curious wooden poor-box and the interior was flagged and dark.

Partrishow avoided Victorian restoration and its conservation was undertaken by W. D. Caroe in 1908-9, with further work on the churchyard in 1919.

Back down the lane in the cwm on the left-hand side stands Ffynnon Issui (St Ishow’s well). Some steps lead down to the well situated close to the Nant Mair brook (St Mary’s stream). One of the steps has a Maltese cross. The well is inside a 1 metre high drystone-wall well-chamber with a slab for it’s roof. There are some niches to allow pilgrims to place offerings or flowers; the water runs into a small square basin at the bottom. According to legend, St Issui a 6th century hermit lived beside the well, so the well is of a pre-Christian date, the holy man using the water to baptise local people. But the saint was murdered by a man who sought shelter with him but had refused to be converted to Christianity; the site of this martyrdom became known as Merthyr Issui. In the middle-ages pilgrims began to come to the holy well to be healed of various diseases and this continued up until the 19th century. But even today people come here and leave crosses made out of twigs and partake of the water in the hope that they, too, will receive a miraculous cure. Coins are also occasionally thrown into the well for good luck!